Five Ways to Write Voice-Over Copy Like a Jedi

And you don’t even have to use ‘the Force’

‘‘You can type this sh*t, but you sure can’t say it! Move your mouth when you’re typing!”

These were actor Harrison Ford’s immortal words to writer/director George Lucas on the set of Star Wars in 1977.

Clunky, unnatural dialogue. Fine for speech bubbles in a graphic fantasy novel. Or a first draft of a film script – read in your head.

But acted out on celluloid? On the big screen? Hmm, probably not. 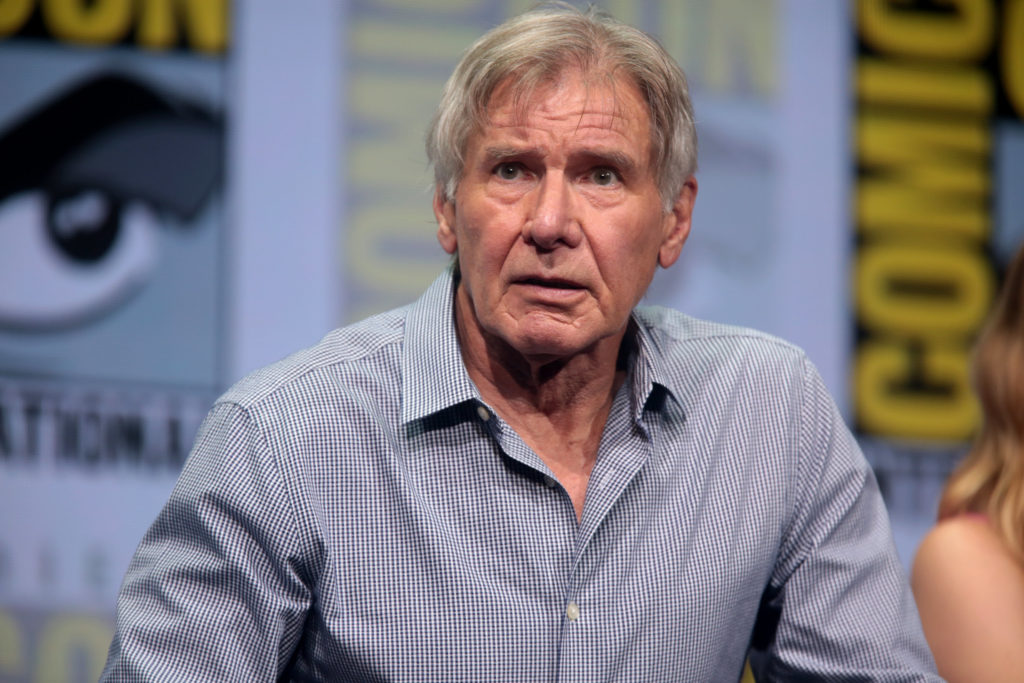 Forty years later, in an interview in 2017, Ford called his on-set jocular jibe a mere ”stress-relieving joke”. But there was no getting away from it – not even in a Millennium Falcon capable of light speed.

In fact, decades later, apart from some good lines (e.g. ”may the force be with you”), and despite billions of pounds made from the franchise, Lucas’s copy still is weird and unnatural in places (sorry Star Wars fans).

But fear not, video and audio production people. I – like a hammy Luke Skywalker declaring to Princess Leia – am ”here to rescue you” from bad oral expression in voice-over scripting and to help you write voice-over copy like a Jedi. 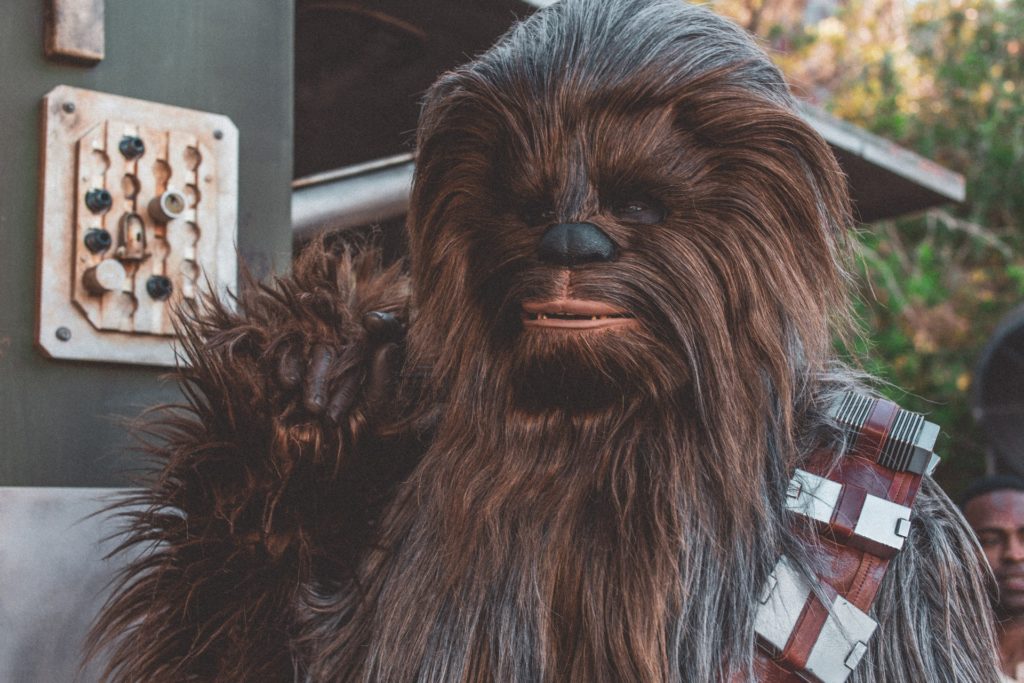 Yeah, I said ‘the copy is chewy’. Do you copy, Chewy?  Photo: Craig Adderley

The first thing you need to do when writing voice-over copy is to do what Harrison Ford said above, which is:

move your mouth when you’re typing

And the only way to avoid chewiness with voice-over copy is to speak it, because that’s exactly how it’s going to be performed by the voice-over artist.

So speak the words you’re typing, while you’re typing. Mutter and mumble away with each keystroke. And get in the habit of doing it on every voice-over scripting project.

Listen out for any odd expressions, syllables jumbling and jostling, consonants slamming together, trip hazards and tongue twisters, parenthetical pussyfooting, and suffocatingly long sentences that could be better split up.

You’ll soon notice if words are flowing or if there are blockages. Speaking of which, here are few a tricky words that I came across in a recent project:

Try saying it to yourself. Bit of a mouthful, isn’t it?

Naturally, I had some concerns about saying this fluidly in a sentence due to the three short ‘i’ sounds, four ‘s’ sounds, two ‘x’ or ‘kss’ sounds, two short ‘e’ sounds and three weak-sounding consonants (L, N, R) trying to hold all of these elements together.

As a set of words, they tripped (rather than rolled) off the tongue and because of that, they needed changing.

Eventually, the phrase was amended to Lexis Nexis Fraud Solutions. This read better, sounded better and actually conveyed better what the service was trying to promote (counter fraud measures).

However, the cost of this script rewrite was two recording sessions. So when it comes to troubleshooting a voice-over script, try to imagine your Chief Financial Officer as a Wookiee standing behind you, watching your every word appear on screen.

Keep the giant fuzzball happy by always talking as you type and always do a full read-through before declaring the copy ‘final’. 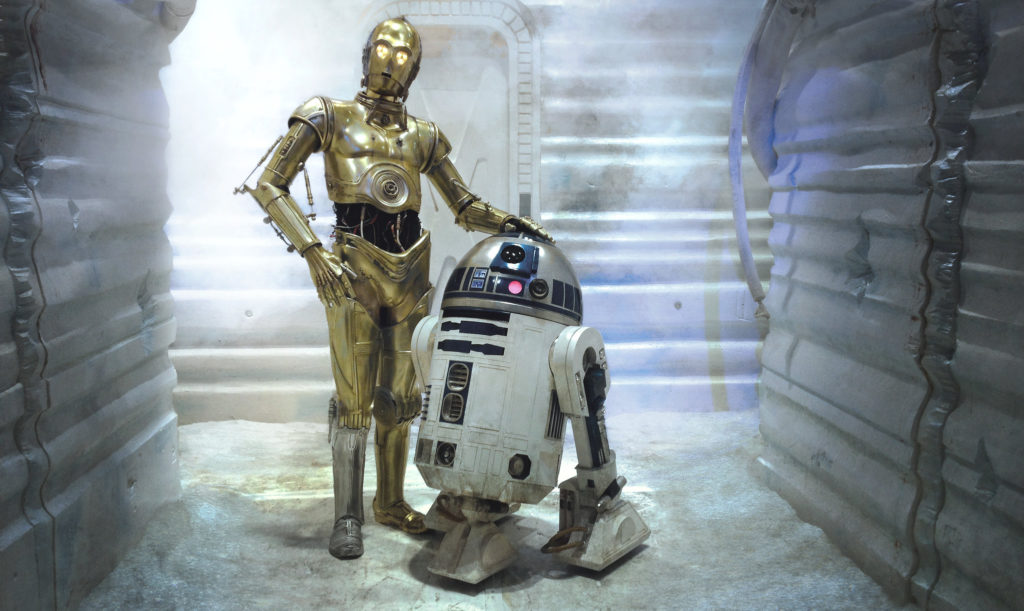 These are not the droids your voice-over copy is looking for. Photo: Gordon Tarpley

The second thing you need to do when writing good voice-over copy is to make it speak like a person, not a droid.

So obviously no pips, beeps, whistles and whines like R2D2. But also no stiltedness like C-3PO trying to run away from blaster fire, either.

Joking aside, you can avoid stiff and staccato reads by using contractions, short sentences and conversational and informal language, so that your message lands smoothly with your audience in an accessible, relatable and human way.

Consider this sentence, for example, which we might imagine hearing in an e-learning module for language learners:

Sounds a bit stiff and formal, does it not? Let’s rewrite this sentence to make it more natural then. Like how we’d speak:

”It’s unnatural to speak English without contractions. It’s also pretty unnatural when speaking other languages, too.”

Can you see, but also more importantly, hear the difference?

The difference lies in shortening (or contracting) “it is” to “it’s”, separating each idea with a full stop instead of a conjunction (“and”), and using less formal vocabulary to provide a more human voice.

The original looks written, while the re-write sounds oral.

Star Trek fans will be familiar with the android character, Data, who is unable to contract his speech because he is a machine (something you can hear several times in the video example below).

But unfortunately, some writers also seem to speak like Data through their copy, because they haven’t properly appreciated that their words are going to be spoken out loud and listened to.

To be clear: if your script says “it is”, “there is”, or “will not”, you should expect the voice-over artist to record these exact words. However, if you really meant to say “it’s”, “there’s” or “won’t”, then you should write these words instead.

So say what you mean. Be literal when writing your voice-over copy.

However, don’t let it speak like Data. This is a Star Wars-themed blog, after all.

But selecting good vocabulary is also important in conveying meaning and making sure that your message is correctly understood.

That said, good vocabulary can only do so much in a voice-over script, because it can’t just be good. It has to be the best.

The choice of words has to be right in every idea, in every line, and in every single breath.

In fact, the right vocabulary could not be more important when translating a voice-over script from a foreign language into English.

Sometimes a word that appears to be a correct and direct translation is, in reality, not the right word for the context of its sentence, or not the right expression for its intended audience – and a different word, whole phrase, or complete rewrite would work better instead.

Other times, you’ll find that a script runs far more smoothly when you shave off unnecessary words. Consider this real-world example, which was translated into English:

If you would like to know which other practical functions this switch offers, then why not watch my other videos about this switch?

It’s rather technically verbose, isn’t it? We don’t need to hear the word ‘switch’ twice. Aren’t all functions ‘practical’? And should we really be politely suggesting to a buyer to do something when we actually want them to do it? No, we should be telling them. And quickly.

We can therefore easily rewrite this sentence to:

To find out what else this switch can do for you, then check out my other videos.

Here, we’ve removed the repetition of the word ‘switch’ and reduced the length of the sentence from 23 words to 16. In doing so, we’ve allowed the script, and the voice-over artist, to breathe.

We’ve also taken a bland, word-for-word translation and given it punchiness and personality, transforming it into confident, commercial copy, which talks directly to the customer.

And we’ve also created a little rhyme involving “do” and “you”, a satisfying musical cadence, and a natural, downward inflection to end the sentence.

Which is as brilliant as a lightsabre, quite frankly [cut to next segment with George-Lucas-style transition wipe]. 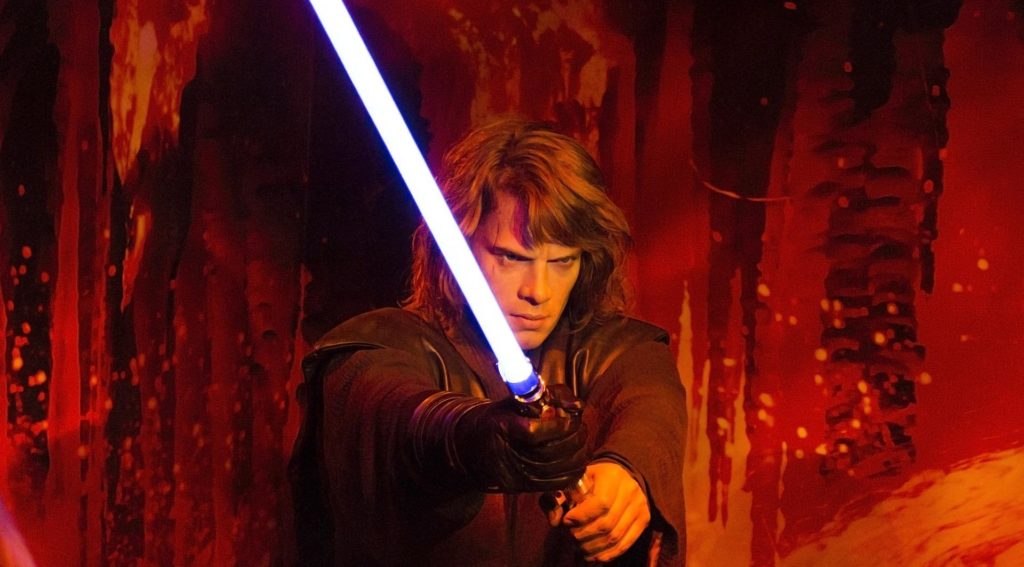 Anakin Skywalker finds a use for a fluorescent strip light.  Photo: Webster2703 from Pixabay

The next way to wield great voice-over copy like a Jedi is to ensure that you always write for your specified audience.

You need to know whom you’re talking to and what your mission is. You don’t want to be like a conflicted Anakin Skywalker (pictured above), hell bent on vengeance while gripping a good-coloured lightsabre. Your copy will end up being very confused and like a worse version of itself.

Instead, use empathy to understand and embody the person or company you’re working for. Get to know their values, aspirations and strategy. Then, in light of these things, think carefully about how they should be represented.

Once you’ve done this, the right words (as explained above) will start to come to you, helping you draw out a meaningful message.

Great communicators always command the attention of their audience, because their words are targeted at, and tailored for, the people they want to persuade.

They know who they’re writing for. They know how their audience thinks. They talk in a language that their audience will understand. And because of these things, their copy is certain to make sense and generate a positive reaction. 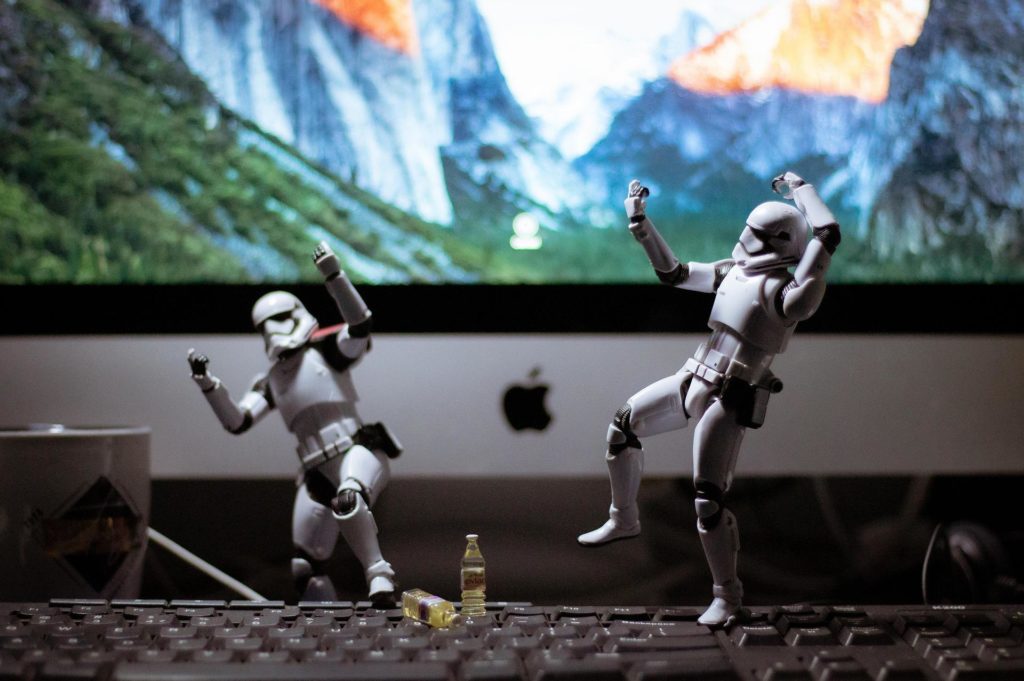 But there’s one more ingredient that’s vital to your message reaching, and connecting with, its intended audience. And that’s a story.

Admittedly, a story might not be exactly relevant for every voice-over genre. However, the copy you write – bearing in mind it’s going to be read aloud – must have at least some characteristics of good storytelling.

Your writing must be dynamic, interesting, informative, entertaining and memorable. Your content should have a solid introduction, a meaty middle and a satisfying end.

And applying every copy tip we’ve described so far should help you achieve that.

The original trilogy of Star Wars films between 1977 and 1983 had great storytelling at their core.

There was a clear character arc for each of the main protagonists (Luke Skywalker, Princess Leia, Han Solo and Darth Vader) with compelling plot twists for all of them – and most pointedly for the hero Luke Skywalker and the villain Darth Vader (who – spoiler alert – turned out to be son and father respectively).

The final three films in the nine-part series (The Force Awakens, The Last Jedi and The Rise of Skywalker) are – by contrast – an incoherent, nonsensical, confusing mess of bad storytelling.

Just ask Star Wars creator George Lucas’s wife, who edited the first film in 1977 and actually won an Oscar for her work. She knows the difference.

However, bad storytelling can sometimes be good. Take, for example, this scene from Bruce Almighty (below), where Jim Carrey’s deliberately rubbish copywriting is transformed into pure comedy gold.

Ok, so Harrison Ford might not have been completely correct when he told Star Wars creator, George Lucas: “you can type this sh*t, but you sure can’t say it”.

But if this clip above demonstrates anything, it’s that “move your mouth when you’re typing!” is still pretty good advice – even if you look like an idiot while you’re doing it.

That’s all, folks. Thanks for watching and reading – and happy voice-over hiring.

If you liked this article, please share it via the social media buttons below. A credit and a thank you to the author are always appreciated.

How To Hire A UK Voiceover Artist – Chas Rowe

Chas Rowe is a UK voice-over artist, writer, former radio journalist and newsreader, and an advocate for best practice in professional voice-over production and hiring.

He holds degrees in French and German, Film & Television Studies and Multimedia Journalism.

To hire Chas for your next voice-over project, please email: [email protected]