Reflections on a star’s creativity – on and off the court 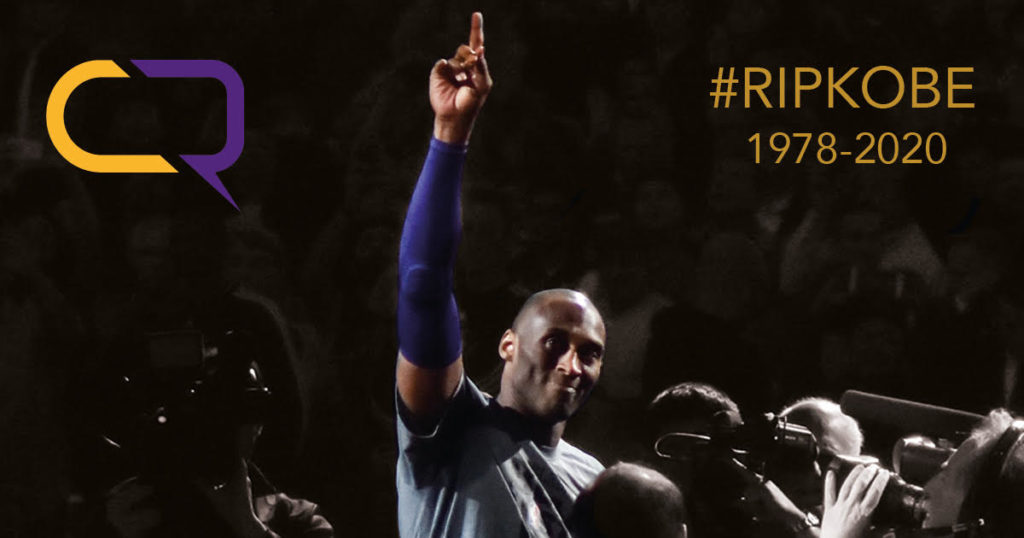 Like many people around the world with a strong pull towards the sport of basketball and a longtime passion for the NBA, I struggled to sleep on Sunday night.

Kobe Bryant – the retired 5-time NBA champion and double Olympic gold medallist – had died suddenly, killed alongside his teenage daughter (a promising player in her own right) and seven other people, in a helicopter crash in fog in California.

The news came to me in a WhatsApp message from my brother, with whom I had shared my own basketball battles in our driveway, growing up.

”This is truly awful”, I tapped.

As the magnitude of this terrible personal, familial and sporting tragedy sank in, I began to reflect on how much Kobe Bryant had achieved in his 41 years before his future family life and post-basketball career goals were so cruelly stolen away from him.

Many tributes to Kobe will draw on his five championships with the Los Angeles Lakers, his two Olympic gold medals with Team USA (at Beijing 2008 and London 2012), his regular season and NBA Finals Most Valuable Player awards (three combined), his 18 selections to the NBA All-Star team, and the fact that he was the only player at his position (shooting guard) to play for at least 20 seasons.

He even stayed with his original club, the LA Lakers, through every one of those years – and once scored 81 points in a single game.

Indeed, Kobe’s final game was almost as dramatic, as then aged 37, the showman dropped a mere 60 points before walking off the court, into the shadow of the tunnel, and into retirement.

Later, Bryant became the only player to have two playing numbers (8 and 24) retired, meaning no other Laker could wear them after him.

Kobe Bryant was an NBA basketball great, a skilful magician of soaring and scoring, a defensive irritant and a fierce competitor, who – as the NBA League Commissioner put it – combined ”remarkable talent… with an absolute devotion to winning”.

This was perhaps most evident in his career points total (33,643), which until the night before his death, was good enough for 3rd on the NBA all-time scoring list. Bryant only slipped into 4th when he was surpassed by current Laker, LeBron James, to whom he tweeted his appreciation: 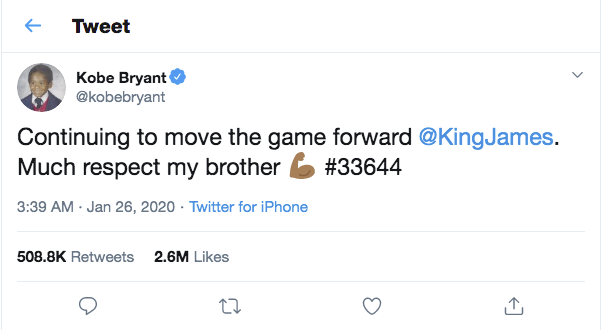 From Prodigy to Professional

Kobe Bryant was also one of a handful of stars who had made the jump – straight from high school – to the world’s ultimate professional basketball league in the 1990s.

He remains the only high school draftee from that decade to have won multiple NBA championships – well ahead of the next big star of that era, Kevin Garnett, who earned one with the Boston Celtics.

But among his many accolades, Kobe Bryant was also in many ways – like my fellow voice-over artists and actors reading this – a professional storyteller.

If you don’t quite see the connection, consider what follows.

First, there was the physical storytelling of his skills on the hardwood: the spectacular dunks, inspirational moves, fadeaway jumpshots and game-winning buzzer beaters.

There was the passion in his gritted teeth, squinted eyes and clenched fists as he overcame defences, got fouled and still scored.

There was the image of the lone man watching the game clock winding down, holding his dribble under the gaze of 40,000 eyes, until he lurched upward, deftly backspinning the leather as another big-time shot arched beautifully downward and kissed through the net to a deafening surge in volume.

Second, there were the plot points of his life story.

There were the positives: the highlights, the titles, the awards – and the game facts and stats, usually accompanied by superlatives.

And naturally there were the negatives: aloof and arrogant teenage behaviour, the fact that he was respected but not necessarily liked, the alleged feud with teammate Shaquille O’Neal, the 2003 rape claim settled out of court after his accuser refused to testify, the ruptured Achilles tendon, and the visible decline of his skills as retirement beckoned.

But there was a third Kobe Bryant, too. The ‘next-challenge’ Kobe.

One might assume that a decorated athlete would struggle to find another passion after scaling the highest levels of professional sport.

And this is where Kobe – as story and storyteller – truly came into his own.

Just as he had switched his playing numbers from 8 to 24 part-way through his career, Kobe proved that he could take his passion and creativity from the court and channel that same creativity and passion into script, storyboard and celluloid.

Less than two years after his 60-point performance in his final NBA game, he became an Oscar winner.

He also became, according to Jemele Hill, ”the first champion professional athlete to win [one], and the first black person to win one for best animated short film”.

That film, which he wrote and narrated, was Dear Basketball – a love letter to the sport which had rewarded his lifelong devotion.

I would challenge any narrator, any filmmaker, audiophile – or indeed anyone – to watch that film today, in light of Sunday’s tragic events, and not be moved by his performance, the tender and then triumphant John Williams score, the heartfelt words that accompany the sketched images, and the goodbye message at the end.

But Kobe was no stranger to the microphone (or camera). He was a journeyman interviewee, a talk show traveller, an advertising personality, a team captain pep talker, and an inspiring ceremonial speaker.

He answered press conference questions in English, Spanish, Italian and even Chinese.

And he once even learnt to play Beethoven’s Moonlight Sonata by ear, so that he could play it for his wife.

In retirement, Kobe was also the writer, producer and host of Detail, his ESPN+ series that took a forensic look at how crucial NBA games were lost and won.

This, too, was Kobe the storyteller.

This was his story.

It was during this period, away from playing, that he remarked to Sports Illustrated: “What I love is storytelling. I love the idea of creative content… that can inspire people and give them something tangible they can use in their own lives.”

In this way, the shooting guard had successfully transitioned into a different kind of a shooter – and a rising star of film and television production.

So farewell, Kobe Bryant: the basketball storyteller who brought his passion to life – spoken and unspoken, on and off the court – for millions of fans around the world.

I – as one of your fans – really enjoyed your story.

I was keenly awaiting the next chapter.

And it fills me with great sadness that your great story has come to an end.

But I’m gradually realising that, in time, I’ll be ok with that.

Because, with time, that’s when a story becomes a legend.

Los Angeles Times – Kobe Bryant, from the start, was an athlete like no other